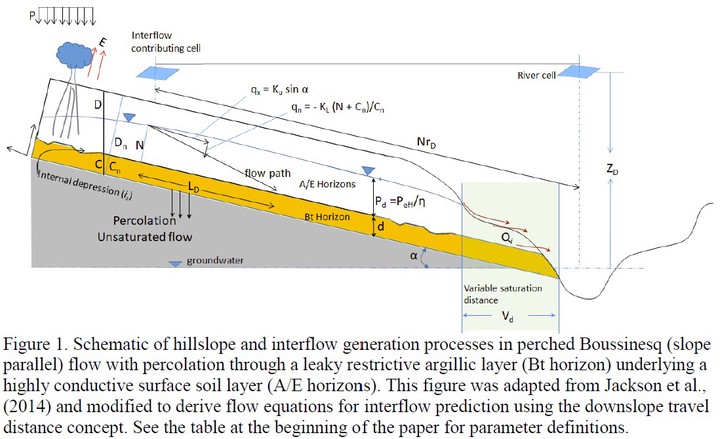 Traditional Boussinesq or kinematic simulations of interflow (i.e., lateral subsurface flow) assume no leakage through the impeding layer and require a no-flow boundary condition at the ridge top. However, recent analyses of many interflow-producing landscapes indicate that leaky impeding layers are common, that most interflow percolates well before reaching the toe slope, and therefore the downslope contributing length is shorter than the hillslope length. In watersheds characterized by perched interflow over a low conductivity layer through permeable topsoil, interflow with percolation may be modeled with a kinematic wave model using a mobile upslope boundary condition defining the hillslope portion contributing interflow to valleys. Here, we developed and applied a dynamic interflow model to simulate interflow using a downslope travel distance concept such that only the active contributing length is modeled at any time. The model defines a variable active area based on the depth of the perched layer, the topographic slope, and the ratio of the hydraulic conductivity of topsoil to that of the impeding layer. It incorporates a two-layer soil moisture accounting water balance analysis, a pedotransfer function, and percolation and evaporation routines to predict interflow rates in continuous and event-based scenarios. We tested the modeling concept on two sets of data (2-year dataset of rainfall observations for the continuous simulation and a multi-day irrigation experiment for the event simulation) from a 121-m-long open interflow collection trench on an experimental hillslope at the Savannah River Site, South Carolina. The continuous model simulation partially represented the observed interflow hydrograph and perched water depth in the experimental hillslope with correlation coefficients of 0.85 and 0.35, respectively. Model performance improved significantly at event scale analysis. The modeling approach realistically represents interflow dynamics in hillslopes with leaky impeding layers and can be integrated into catchment-scale hydrology models for more detailed hillslope process modeling.